The Big Loop –
Riding Around Ottawa

The “big loop” is an informal name for a ride which makes use of a series of pathways to go completely around Ottawa’s core. It runs along some of the more interesting paths in the city, including those which follow parts of the Rideau River, the Rideau Canal, the Ottawa River, goes behind the Parliament Buildings, and passes through the Experimental Farm as well as several large parks.

The big loop is a reasonably long ride and covers a total of distance of 35 to 40 kilometres. It stretches from west of Woodroffe to the Rideau River in the east, and, most part, it is fairly flat. 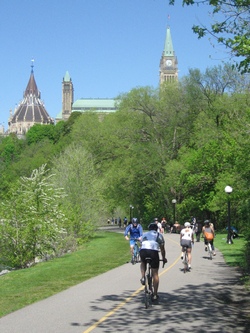 The pathway behind the Parliament Buildings.

It’s nice to ride the big loop every so often just to take in the sights and to see what is happening with the pathways. However, you might want to think twice before using portions of this route on weekends when the weather is nice. Under these conditions, some of the more popular pathways become congested with all sorts of traffic, and you will have to be prepared to cycle very slowly in many areas. (On nice weekends, the quiet roads or paths on the outskirts of town which tend be less busy.)

Because of where author lives in the Ottawa area, the description of this ride starts in the west-end and does the loop in a counter clockwise direction. This means heading towards the Experimental Farm’s quiet roads which are integrated into the pathway network. It’s interesting to ride past cows that are grazing in large fields while still in the middle of the city. From here you cross Prince of Wales Drive and head to a segment of the Rideau Canal that is opposite Carleton University.

You have to get to the other side of the Canal by walking/carrying your bike over one of the lock gates. You then ride south along the canal towards Mooney’s Bay. Because of its proximity to Carleton University, this stretch of the pathway can be busy, even on weekdays. When you get to Mooney’s Bay the path veers to the left and leads you onto the sidewalk on Hog’s Back Road. It is necessary to go on the sidewalk (or road) to cross the bridge over the Rideau River.

The pathway resumes immediately after the bridge, and it soon passes in a small tunnel under Hog’s Back Road. At this point you have an opportunity to stop and check out the impressive view of the water falls and rapids that occur as the Rideau River spills over the top of the dam that holds the water in Mooney’s Bay. There is also a fast-food restaurant nearby that is convenient for getting refreshments, snacks, or even a quick meal.

Along the Rideau River

From here you follow the pathway along the Rideau River until it comes to an end at the Ottawa River in approximately 12 kilometres. This is really one of the nicer parts of the entire ride. In addition to being right next to the Rideau River most of the time, the path runs through no less than six parks (including the Vincent Massey Park). As an added bonus, the pathway also passes under many of the major roads, so there is less need to deal with busy intersections. As you get closer to the Ottawa River, the pathway dumps cyclists onto a quiet side street for a few hundred metres. It is not immediately obvious where the pathway resumes, but you’ll be able to figure things out by simply relying on your sense of direction.

The path ends at Sussex Street, where you’ll turn left to continue your ride. Before doing so, you might go into the small park straight across Sussex. Here you will be able to take in a view of the water falls which provided the name for the Rideau River and the Rideau Canal. When the first French explorers came up the Ottawa River and saw these falls, it reminded them of a “curtain” of water (or “rideau” in French).

Behind the Parliament Buildings

You now have to head west for slightly less than two kilometres on Sussex. Although this street is busy, parts of it have a lane reserved for bicycles. As you get in the Market area, you’ll have to find your way onto the pathway which runs behind the Parliament Buildings. Unless you know where to go, this can be a challenge. The trick is to continue on Sussex until you are in front of the National Art Gallery of Canada (the building with large glass facades). You then go towards the back of the arts museum by turning right onto St. Patrick Street. As you approach the rear of the museum, you will spot an opening for the pathway in a stone fence on the left side of St. Patrick Street.

Once back on the pathway, stay right until you go down a long hill which leads to the beginning of the Rideau Canal. It will again be a matter of crossing the canal by walking/carrying your bike over the top of the lock gates. You will now be able to proceed directly to the pathway that runs behind the Parliament Buildings. This area is very scenic, and is where photos are often taken for tourist brochures promoting bicycling and the recreational pathways in the National Capital Region.

In another kilometre you come to the intersections of Wellington Street, Portage Bridge, and the Ottawa Parkway. Fortunately, the pathway provides for tunnels to pass under these busy streets. As you approach the intersection, you will have the choice of turning right, and pass under the Portage Bridge, or turn left, and go through two tunnels to pass under Wellington Street and the Ottawa Parkway. However, the situation can be a little confusing with either route. Under a worst case scenario, you may have to spend up to two or three minutes (no more) figuring things out.

Along the Ottawa River

Regardless which route you take, you end up in the parking lot of Mill Street Brewpub. It’s a popular stop with cyclists who want enjoy a cold beer. From here it is easy to find the pathway which follows the Ottawa River, and you will head west on it for the next 10 kilometres. You will then ride past by the Canadian War Museum and, soon afterwards, the Prince of Wales Railway Bridge. This bridge crosses the Ottawa River, but it is no longer in use. 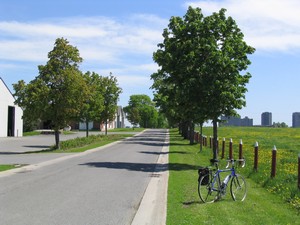 One of the quiet roads in the Experimental Farm.

It is worth noting that in 2005 there were news reports that the National Capital Commission would be holding consultations about using this old railway bridge to establish a new pathway to cross the river. This would have been a great addition to the network of local paths, but nothing seems to have come of these consultations.

The Ottawa River Pathway passes by the Champlain Bridge and soon afterwards the Westboro Beach. At the beach there is a licenced restaurant complete with terrasse and plenty of place to lock your bike. It is a great place to stop for refreshments, a bite to eat, or just to take in the view. Of course, if it’s a hot day, there is nothing like taking a quick dip in the river to cool off.

As you go further west, you will eventually come to a fork in the pathway. Stay right, and you will be heading for Britannia Park and points further west, including Stittsville and even Carleton Place. But in order to complete the big loop, you will have to stay left on the pathway which veers towards the south and follows the OC Transitway. Here it is called the Pinecrest Creek Pathway, and it passes under a number of major roads, including Richmond Road, Carling Avenue, and the Queensway (where you’ll ride right next to a Transitway Station). At the intersection of Iris Street, the pathway resumes on the opposite side of the Transitway.

The pathway gradually turns eastward and crosses Woodroffe avenue (in front of the Fire Station). You’ll now pedal through a series of open fields. It is pleasant enough, but not the most interesting part of the ride. After crossing Maitland Avenue, you will find yourself climbing a few hills (nothing too serious) in a nice wooded area. From here you will approach the Experimental Farm, and will have completed what I call the “big loop”.

Needless to say, it is possible to start this ride from any number of points along the loop, and the route can easily be modified to suit your needs. There are a number of ways of making it a smaller loop. An obvious option would be to take one of the paths along the Rideau Canal instead of going all the way east to the Rideau River. In the west, the route could be truncated by riding along Island Park Drive. Although this option takes you off the paths, there is a lane reserved for bikes along much of Island Park Drive.

Expanding the Loop in Quebec

It is also possible to expand the loop by riding on the pathways in Gatineau on the Quebec side of the Ottawa River. For example, when you are behind the National Art Gallery, continue on St. Patrick Street until it brings you across the river on Alexandra Bridge. Once in Gatineau, head west on the pathway along the Ottawa River. Here you’ll be riding behind the Canadian Museum of Civilization. The view form parts of this pathway is as good as or better than on the Ontario side of the river. When the pathway emerges at the Portage Bridge, you’ll have the option of heading back to Ottawa and picking up the path near the Old Mill Restaurant.

You could also stay on the Quebec side of the river for another four or five kilometres until you reach the Champlain Bridge. For many years there was a gap in the first part of this pathway, and was it was necessary ride on busy city streets for two or three blocks. Fortunately, this no longer the case, and it is now possible to stay on the pathway when heading further west. When you get back to Ontario after crossing the Champlain Bridge, turn right onto the pathway which runs along the south side of the Ottawa River. You’ll soon pass by the Westboro Beach, and you will be able complete the loop described above.

And finally, it’s worth noting that when planning a route that crosses the Ottawa River, the Champlain, Alexandra and Portage Bridges all have good bicycle laneways.

So that’s it; the big loop. Happy cycling.