The ride from Gananoque to Kingston is only 29 kilometres long, and while it is quite nice, there is nothing spectacular about it. It does, however, fill in an important gap for anyone who has cycled the Thousand Island Parkway, or crossed the Thousand Island bridge from the States, and who wants to head west to Kingston, Prince Edward County, or beyond.

The entire ride takes place on Highway 2, a road which will bring you right into downtown Kingston. One of the best things about this route is that you will generally be cycling on a nice paved shoulder that is about a metre wide in most areas.

Highway 2 can be busy at times, but for the most part, traffic isn’t all that heavy, and there are not many trucks on this road. You should keep in mind that once you get out of Gananoque, there are very few places along the highway where you can stop to buy a snack and cold drink. There are a few hills along this route. They are more like long slopes, and while they are nothing too serous, they may elicit complaints from people who truly adverse to any type of hill climbing.

Highway 2 is no more

It should be noted that technically, this thoroughfare lost its designation as a “highway” in the late 1990s, and is now officially known as County Road 2. However, it is similar to most two lane secondary highways in Ontario. As a result, many people still call it Highway 2, and this is how it is referred to in this article. 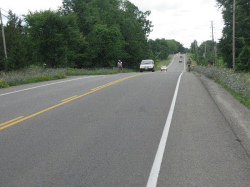 This part of Highway 2 has a good paved shoulder. (scroll down for more photos)

Although this route parallels a portion of the Thousand Islands, in most areas Highway 2 is far removed from the waterfront, and you will rarely get a view of the St. Lawrence River. The scenery generally consists of farmland. When riding through this area, you may get the impression that the land may not be as productive as other parts of Ontario. There are some nice looking farms, it’s just that there doesn’t seem to be that many of them. Also, if you pay attention, you may notice the remains of old motels that used to be going concerns in the days when Highway 2 used to be a busier place.

When departing from Gananoque, you will head west on King Street. There are a few curves as King Street makes its way through the west side of town, an area with a good number of large old homes, several of which have been converted into impressive bed & breakfasts or country inns. King Street soon becomes Highway 2, and you simply stay on it until you reach Kingston.

As you approach Kingston, Highway 2 will run through a Canadian Armed Forces Base. On your right you will soon pass by the turn off for Canada’s Royal Military College as well as the Fort Henry National Historic Site. If you have some time to kill, you may find it worthwhile to visit Fort Henry, which is now part of a UNESCO World Heritage Site.

The Lasalle Causeway into Kingston

To get to downtown Kingston, continue straight on Highway 2 and cross the Cataraqui River on the Lasalle Causeway. Note that a hundred foot section of this causeway consists of a drawbridge with a grated metal surface, and this can be a little skittish to ride on. If you are uncomfortable with this, simply walk your bike across the bridge. For all practical purposes, the causeway leads right into downtown Kingston. When you get off the causeway, stay to your left and, and in a couple of blocks, you’ll find yourself in the downtown waterfront area opposite Kingston’s city hall.

Kingston is a City of 150,000 people that is one of the major tourist centers in eastern Ontario. It has lots of history and old buildings as well as a lively downtown core. There’s no shortage of things to do and see in Kingston. If you decide to stay, there are a number of four star hotels around the waterfront area, but these can be quite expensive during busy summer months. For something more affordable, see what’s available at the tourist office in the park opposite the city hall.