Wolfe Island is a little under 30 kilometres long and about 10 km wide, and it has developed a reputation for being as good destination for cyclists. One of the reasons for this is that, being an island, there is limited traffic on its roads. It’s also popular with cyclists in the Kingston area who are looking for a place suitable for extended day rides. (There aren’t many good cycling routes within Kingston itself).

The island owes it name to General James Wolfe, and not, as some people may think, the presence of wolves. It has a permanent population of about 1200, but this can swell up to 3000 during the summer when vacationers come visiting and cottagers take up residence on the island. Its interior consists of mainly farmland, with cottages surrounding the periphery. For the most part the terrain is quite flat, especially the eastern section of the island. There are a few long slopes and the odd hill on the western portion of the island, but nothing very serious. 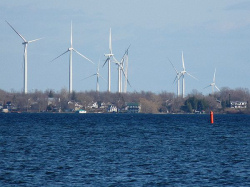 Some of the wind turbines which popped up in 2009. (scroll to the end for more photos)

It should also be mentioned that Wolfe Island’s skyline changed radically in 2009. Throughout the fall and winter and spring of 2008/2009 a huge wind farm consisting of 86 giant turbines was built on the western half of the island. The combined height of the base and blade of each unit is 125 metres (410 feet), and the sheer number of these mammoth wind turbines makes for an impressive sight when viewed from Kingston’s waterfront. The existence of what is currently Canada’s largest wind farm may make Wolfe Island a more interesting destination for curious sightseers who would like to get a close up look at the turbines in action.

Getting to Wolfe Island

Getting to Wolfe Island is marvelously simple. Take the government operated ferry at the terminal located two short blocks northeast of the Kingston’s main waterfront area. It is a surprisingly large ferry that is 200 feet long and handles 51 cars. During the summer, it leaves almost every hour, it runs from early in the morning until late at night (see the schedule with the link below). The best thing about the Wolfe Island ferry is that, because it is part of Ontario’s road network, it’s absolutely free, whether you are travelling to or from the island by foot, bicycle, or vehicle.

Cyclists do have one major advantage over motorists when it comes to using the ferry – there is always room for bicycles, even for those that show up at the last minute. By comparison, during busy vacation periods, cars sometimes have to line up for 30 to 60 minutes in advance to be sure of getting a spot on the next ferry.

Cyclists generally park their bikes in the forward corners of the ferry (or in the rear corners, if you are getting on at the last minute). Most then take the stairs to the upper deck to get a seat or simply enjoy the view. It takes the ferry about 20 minutes to cross what is the beginning of the St-Lawrence River. This nice boat ride is an added bonus for anyone taking a bicycle trip to Wolfe Island.

The ferry will bring you to Marysville, the only real town on Wolfe Island. Although it’s a small village, Marysville’s streets can become surprisingly busy with the arrival or departure of the ferry. Marysville does have a small grocery store and couple of restaurants, including a snack bar. There are very few other places on the island where you can buy drinks and snacks, so this is where you should stock up on anything you might need. If you are planning to stay a while, there are a number of B&Bs on the island, with several in the immediate vicinity of Marysville. The village is also where you will find the General Wolfe Hotel (built circa 1860) with its renowned 130 seat restaurant.

When planning your ride from Marysville, you will essentially have two choices if you want to stay on paved roads. You can head south on Highway 95, or travel east on Highway 96 (or west for a short distance ). For the most part, these roads are located in the interior of the island, meaning that you will generally be looking at farmland during your ride. It is also worth noting that while these thoroughfares are called highways – the term is being used very loosely – they are really nothing more than paved country roads. You should be aware that with the exception of the two highways, most of the roads on Wolfe Island have a gravel surface. If you plan to ride on these gravel roads for any distance, you will probably want to use a bicycle equipped with fairly wide road tires (at least 35mm tires), or a real mountain bike.

South to the USA on Highway 95

Highway 95 is about 10 kilometres long and crosses Wolfe Island in a north-south direction. Parts of this road are not in the greatest of shape, and it does not have a paved shoulder. However, this isn’t much of a problem because the road is fairly quiet, except for the brief flurry of traffic when vehicles get off the ferries to cross the island.

The best thing about Highway 95 is that it brings you to the ferry on the south side of the island which provides cyclists with easy access to Cape Vincent in the United States. This ferry is currently operated by the Horne family, and has been around in one form or another since 1802. Unlike the government operated ferry between Wolfe Island and Kingston, there is a fee for taking this ferry ($2 for bikes as of 2008). It is also considerably smaller than the ferry from Kingston, but the crossing is also much shorter.

In case you’re wondering, there is some good cycling to be done on the American side of the border on New York State’s “Seaway Trail”. This trail features a scenic route which stretches for approximately 730 kilometers (450 miles) and follows the south shores of the St. Lawrence River, Lake Ontario, the Niagara River, and Lake Erie. In a number of areas this Seaway Trail consists of a nice wide paved shoulder that runs along busy and not-so-busy roads. If you plan to cross the border, remember that as of June 1, 2009, Canadians will require a valid passport or an enhanced driver’s licence (or other specifically approved card) to enter the States. It’s also a good idea to get medical insurance when travelling outside of Canada.

In addition to heading to ferry for the USA, there is, with one caveat, another reason to go south on Highway 95. This is the route you have to take to get to “Big Sandy Bay”, a 404-hectare day-use area on Wolfe Island’s west coast. Most of this area consists of government owned land, and it includes several kilometres of beautiful unspoiled beaches and sand dunes. The only problem is that the locals appear to have found a way of monopolizing the area under the guise of managing Big Sandy Bay. This has resulted in a situation where people have to pay $8.00 (the price as of 2008) to enter the area. Needless to say, $16.00 is a lot pay for a couple who would like stop for a quick dip in Lake Ontario while out on a bike ride. 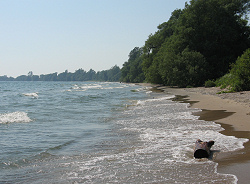 If you do decide to check out Big Sandy Bay, you will have to cycle south on Highway 95 for about four kilometres, and then turn right on Reed’s Bay Road (which later becomes 3rd line road as you get closer to the waterfront). Reed’s Bay Road is paved, but you will have to ride on a gravel surface (hard packed in the tire ruts) for about a kilometer on 3rd Line Road. At a certain point, you’ll get to the gatehouse where you’ll have to pay $8.00 to go further. Here you will also discover that you are not allowed to ride your bike on the trail to the beach – you have to walk the final kilometre. Perhaps they will come up with better policies concerning the public use of government land in the Big Sandy Bay area in the not too distant future.

Heading east on Highway 96 is another choice you have when departing from Marysville. This road zig zags through the middle of Wolfe Island, and it is about 25 kilometres from Marysville to the eastern tip of the island. The landscape is basically rolling farmland, and while pleasant enough, there is nothing overly exciting about the scenery. Highway 96 is paved, but the edges are in terrible shape in a number of areas. Also, as was the case with Highway 95, there is no paved shoulder on this road. Fortunately, none of this presents a serious problem for cyclists as there’s not much traffic on this road. There are, however, enough cottagers on the island to create a regular trickle of vehicles, and the arrival and departure of the ferry can trigger a noticeable flurry of traffic.

Although most of Highway 96 lies east of Marysville, there is a six kilometre section which runs through the western side of the island. This short segment of Highway 96 deserves some consideration because it follows the shoreline and is one of the more scenic routes on Wolfe Island. There is a bonafide hill on this part of Highway 96, and it is worth climbing if only for the great view you get of Kingston across the water. The problem with cycling this western portion of Highway 96 is that it is relatively short, and at the end, it dumps you onto a gravel road. If you want to stay on pavement, you’ll have to backtrack on the 96. This is also the area with the greatest concentration of wind turbines.

It is worth noting that a local group promoting tourism has marked three bicycle routes on Wolfe Island. Maps of these routes are available on the web (see the link below) or on a photocopied sheet of paper that can usually be picked up at the tourism kiosk at the ferry terminal in Kingston, or at the information offices in both Kingston and Wolfe Island. These routes are also marked with nicely crafted colour-coded bicycle symbols (they are cut out of metal). These symbols have been posted to whatever is available next to the roads, and as a result, a few are can be difficult to spot.

These three bicycle routes are basically variations on what has been highlighted in this article, namely (1) heading east on Highway 96, (2) heading west on Highway 96, and (3) heading south on Highway 95. While the proposed routes feature loops to bring cyclists back to their starting point, part of these return legs will sometimes take you off the paved roads. There is nothing wrong with this if you have a mountain bike, but as mentioned earlier, riding on some of these gravel roads on narrow road tires can be uncomfortable, if not down right difficult.

While Wolfe Island should be considered an above average venue for an extended day-ride, it doesn’t quite rate as a top destination for cycling. It does have a lot of potential, but the island would be more enjoyable if its roads were better maintained, if it had a few more paved roads, and if it had better policies for making Big Sandy Bay a more inviting place for cyclists to visit. Nevertheless, Wolfe Island is definitely worth checking out, especially if you are planning to spend any time in the Kingston area or are interested in getting a close up look at a major wind farm operation. And finally, cutting across the island is definitely a worthwhile route for cyclists who are heading to the States.