The Georgian Trail:
Cycling between the
Blue Mountains & Georgain Bay

This trail has been around since 1989, and is an example of one of the earlier conversions of a railroad line into a bicycle path. This 34 kilometer trail runs between Collingwood and Meaford along the south coast of Georgian Bay. It is quite flat and made of hard packed crushed stone, which is almost as hard as pavement in many places. 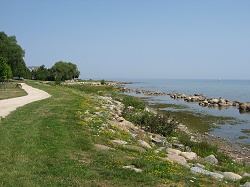 Trail near the town of Meaford.(scroll down for more photos.)

Because of its railroad heritage, the Georgian Trail is fairly straight, a feature which can make certain areas a little monotonous. Nevertheless, several segments of this trail have good tree coverage, which can provide some shade for cyclists even in the mid-day sun. Signage and facilities specifically installed for the trail aren’t great, but they are adequate (there are benches at regular intervals).

One of the good points about the Georgian Trail is that it is maintained as a dedicated bicycle path (and cross-country ski trail in the winter). This sets it apart from the many trails that are primarily converted and maintained for snowmobiles. It often seems that these trails allow for bicycle usage during the summer season more as an afterthought.

The best thing about the Georgian Trail is its location. A good stretch of the trail is wedged between the Blue Mountains, home of Ontario’s largest Ski resorts, and the beautiful Georgian Bay. All of this makes for a very scenic ride, although the Georgian Bay is only visible from parts of the bicycle path (mainly in the area closer to Collingwood). Towards Meaford, the trail passes through an apple orchard.

There are a number of places where it may be worthwhile getting off the trail to get a better view of Georgian Bay. For example, cyclists can turn on to the quiet residential streets next to the Tourist Information Office on the east side of Thornbury to ride along the shoreline and access a public beach. In fact, there are a number of public beaches where cyclists can stop for a cool dip along the trail. One is the Northwinds Beach, which is about 6 kilometers west of Collingwood (and visible from the path). Another is in Meaford, at the north end of the town’s main street (at the corner of Sykes & Bayfield).

The three towns along the trail are also ideal to visit by bike. Collingwood is by far the largest. It is actually a small city and one of the tourist hubs for this part of Georgian Bay. People starting from Collingwood should be able to find the trail in the area behind the Canadian Tire store on Balsam street (in the northwest corner of town).

Thornbury marks the mid-point of the trail. Here the bicycle path passes by a nice restaurant/pub with a patio that overlooks the waterfront. Thornbury is a charming little town, but it seems to be experiencing a housing construction boom in new subdivisions that are popping up along the shoreline of the bay.

While Meaford is a bit bigger than Thornbury, it still has to be considered a small town. It has a nice compact downtown area where cyclists will easily find restaurants, stores and other services. The starting point (or end point, depending on your perspective) of the Georgian Trail is located roughly opposite the entrance to the large parking lot of the Meaford Harbour Complex (at the east end of the small bridge to the downtown core).

While the Georgian Trail is a great place for cycling, it does have one major drawback. Good portions of it parallel Highway 26. This is a relatively busy road which is often within visual and audio distance. Making matters worst is that where the trail intersects the highway, there are no road signs informing motorists that there are bicycle crossings on the road. It’s difficult to imagine why responsible authorities have not erected such signs.

Bottom line – the Georgian Trail is a good choice for beginners given that it isn’t too long, has a good hard packed surface, is devoid of any real hills, offers a nice scenic ride, and passes by some interesting towns.